***** NOTE: There is a separate article in THURMAN page for those not receiving NEWSLETTER. 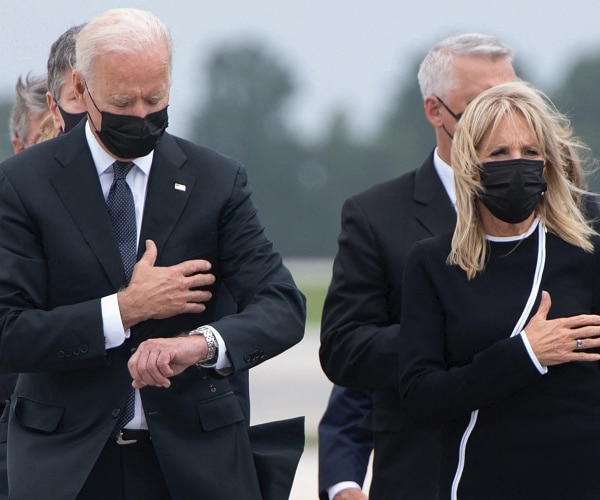 By now you have all seen this image. And what was your response? Did you, once again say somebody has to do something!? Oh sure, and who is that "somebody"? Obviously it's not anybody in Washington, or the Military, or the Dept. of Defense. Certainly not RINO's. They are just a bunch of two faced cowards.

I understand there are those (surviving families) that were quite upset with Bidens' words to them at the service when receiving the returning military caskets. Seems some parents did not even stay for his words, and others angry as he only mentioned, once again, his son Beau.

I for one, am a believer of something larger than our life here on this Earth. I also believe that something larger has a way of dishing out praise and punishment. I have seen situations that have strengthened that belief. Did Joe Biden get punished by losing his wife and child in a horrific accident years passed?; and was he also punished by losing his good son to cancer?; and is it also punishment by leaving that piece of 'nothingness' as his only remaining child here on this good Earth to watch and wallow in anguish?????

If so, then I also believe that we have not seen all of the punishment as of yet. I hope I live to see the day!!!! And I believe that those in D.C. will receive their punishment for their actions of the last two weeks. We have, my friends, a group of "lower-than-life" people in our Government. I see these folks as a group controlled by Satan himself; a group of two-faced, back-stabbing, mentally diminished Humans that have no feelings, no compassion and no sense of reasoning for anything other than power and a sickening need to control the Universe.

My words here are just a brief note to my fellow Humans. Sometimes it feels good just to let it out.

Stay well and pray for everyone that has sustained loss at the hands of those in D.C.